(I Love The Sound Of) Breaking Glass 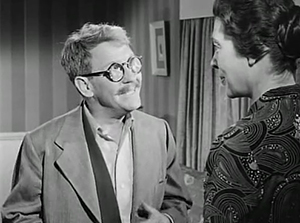 I had seen “Time Enough at Last” before, although it was a long time ago. I remember how it ended of course, but I didn’t remember anything else really, except that it had Burgess Meredith. The scene between Henry and Helen, where she confronts him after he has hidden a book in his pocket, interested me. It looked to me like she was struggling to keep a straight face, especially while the camera was looking over her shoulder. I thought it might have been a mistake that they left in because it’s not too noticeable. But as the scene progressed, I changed my mind. It’s more like foreshadowing. She was suppressing laughter from the cruel joke she had played on him. 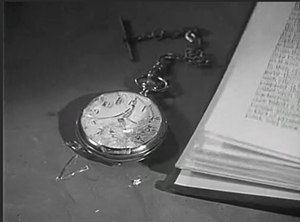 With that idea of foreshadowing on my mind, the part where his stopwatch breaks just before the bomb goes off jumped out at me. It symbolizes the apocalyptic stoppage of time and sets us up for the glasses breaking. The watch seemed to just pop all by itself. Maybe that’s to show that sometimes things just break for no reason. 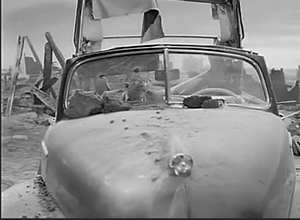 Then he finds the car with the broken windshield. Because I knew his glasses were going to break, I immediately made the connection. There was a little thing just before that, when he fell asleep on the couch. He dropped his cigarette into the folds of his jacket. It could have started a fire or burned a hole in it, but nothing happened. It just made him seem like an accident waiting to happen. I wonder what foreshadowing does for the person seeing it for the first time. Does he or she connect the glasses to the windshield and watch? It all seems very clever looking back, or on a second viewing, but would it change the experience if we didn’t see broken glass before the climax? Our eyes and brains pick up all those little details, even if we don’t really give them conscious attention. But I don’t know what their impact is.

This entry was posted in Uncategorized and tagged ds106, ds106zone, Penguin, twilightzone. Bookmark the permalink.