When I watched The Invaders episode, I thought the spaceship’s distress call might be useful for an audio project. And of course I didn’t want to let go of the Golden Earring thing that I used before.

This whole thing came together pretty easily. The song has an extended instrumental part in the middle, which I thought would make for good background music. I used Audacity in combination with Soundflower to capture the audio portion from the episode. I deleted the reference to Gresham to make it more of a generic warning, then copied and pasted the “Stay away!” part several times. I used the Effects-Fade Out function on the ending, then recorded the radio ID part.

The challenge was in getting the relative volumes of the different parts right. I wanted the opening part of the music loud, but I didn’t want it to drown out the spoken part. I used Effects-Amplify on the spoken part. I think the default setting makes it as loud as it can get without distorting the peak parts. This was okay for the beginning part, but the music gets louder when the guitar comes in, and it starts to drown out the voice. There’s a volume slider for each track on the left side of the Audacity screen, but using that diminished the punch of the opening. So I selected the part of the music track from where the waveform started to get bigger to the end, then used the Amplify effect but adjusted it to a negative number of decibels. I had to experiment with that a few times to get it more or less right. I did a fade out on the music track, used the Tracks-Mix and Render function to mix it down, gave it a final listen and exported to mp3. Here’s an Audacity screenshot that sort of shows the three pieces: 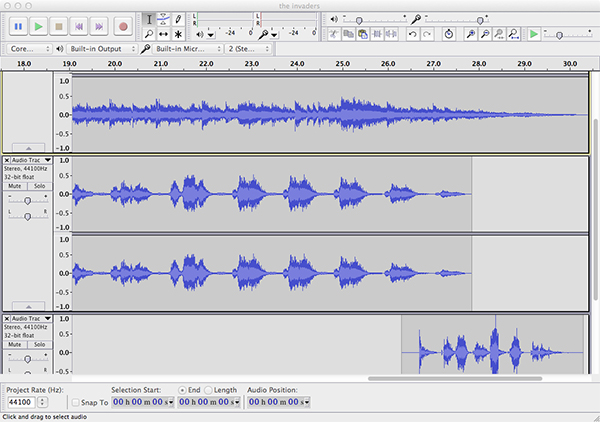 7 Responses to Things that go bump