I think I first heard the term space opera used in describing Star Wars, and I’m pretty sure it was used in an unflattering sense – as a play on soap opera. Some sci-fi geeks looked down on George Lucas’ film as an adventure story set in outer space, without any real science-y elements. It wasn’t even futuristic really – a long, long time ago in a galaxy far, far away. 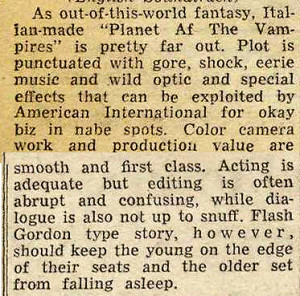 I was looking to see what people had to say about Bava’s work when it was new. I couldn’t find much. I suppose reviewing B movies in the sixties would be like reviewing direct-to-video releases today. Or Youtube. I did locate a Dec. 1, 1965, Variety review of Planet of the Vampires which basically pans the film but gives props to Bava’s visual sensibility. I didn’t really expect to find anything more, but I did.

There was an article from Opera Quarterly, “Vampires in Carthage,” that referenced Planet of the Vampires. Opera troupe The Wooster Group did some sort of bizarre multimedia mashup of Francesco Cavalli’s 1641 opera La Didone and Bava’s 1965 film, titled Terrore nello spazio in Italian. Now, opera is not my thing. Classic B movies I can devour, but classical classics aren’t really my bag. But this concoction sounds fascinating.

Apparently the stories play out in parallel on the same stage. “Two ships, two sets of captains and crews, two alien lands in which it’s all too easy to get lost.” to quote the NY Times (Lost in Space With Dido and Aeneas). Scenes from the film are shown on monitors, others are re-enacted on one side of the stage, while La Didone is performed on the other. Players shift from one story to the other, sometimes in mid conversation. Both scripts are displayed above the stage. The baroque music is performed more or less faithfully, but some parts are played on modern instruments like accordion and electric guitar. There’s a bit about the opera in Encore magazine as well. 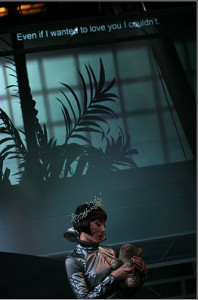 There’s other parallels in the stories besides crashing ships. Bava’s characters are reanimated and possessed by alien life forces, which the English title identifies as vampires. Some of Cavalli’s characters, derived from Virgil’s Aeneid, are possessed by the gods. That coming back from the dead thing, spiritual possession, and general things not being what they appear, are all themes that Bava revisits throughout his films.

Another thing that’s not what it seems is the time frame of the movie. We watch it and assume that these are earth people sometime in the future, but the closing scene indicates otherwise. That temporal confusion is reflected in the Wooster Group’s production, pairing a seemingly futurist film from nearly fifty years ago with an opera that’s three and a half centuries old, performed on modern instruments. 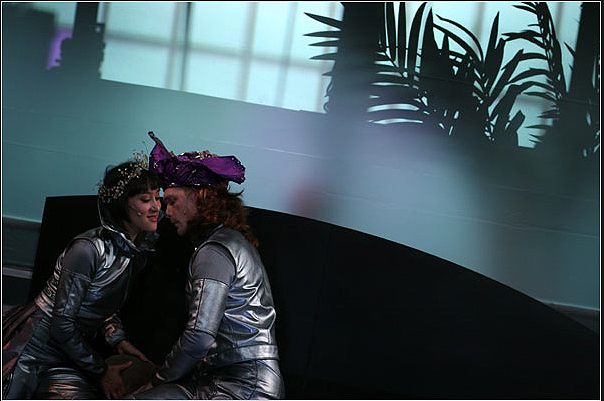 The Times article links to a slide show of stage shots. You can see the Bava influence in the color schemes and the use of light and shadow, and in the styling space suits. There’s also a video online that shows a snippet of the performance.

So I guess space opera has a whole new meaning, or at least a new nuance.

This entry was posted in Uncategorized and tagged mariobava, planetofthevampires, spaceopera. Bookmark the permalink.