It’s too bad time constraints knocked The Big Blowdown off the reading list. It makes a nice closing book because of the way it connects to so many of the others, from echoing minute details (“The Doc put fire to a cigarette” harks back to a line from Red Harvest) to larger themes. The coming of age during wartime theme from In Our Time is nicely bookended here. I started to map out some connections in a VUE map. It needs more work though. Too bad I didn’t start something like this from the beginning – then we’d really have a tangled web. 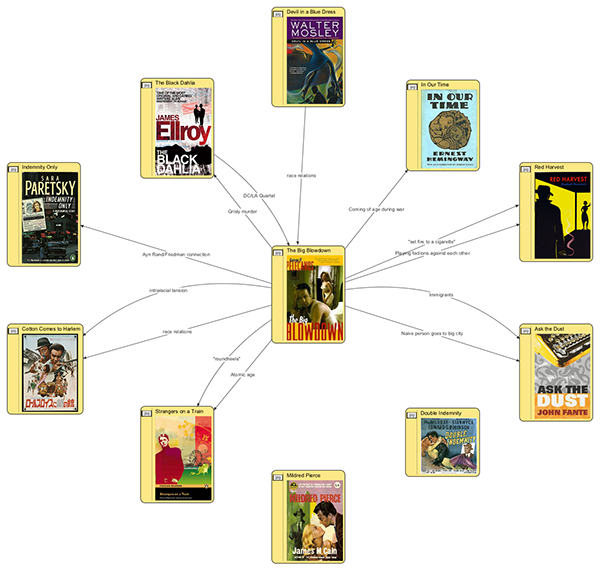 I’m going to miss the class discussion component. I would have liked to hear what people thought of how The Big Blowdown represents the time it comes from, the mid 90s. Up until these last three novels, they’ve all been set in the time in which they were written. Then Ellroy and Mosley looked back to postwar LA from the vantage point of the mid 80s and early 90s, and Pelecanos has us in postwar DC. Just like science fiction is set in the future but really talks about the author’s here and now, I suspect these books say a lot about their times. Jim Groom brilliantly connected the grisly details of The Black Dahlia with the slasher movie trend that started in the 80s. Devil in a Blue Dress dealt with racial tensions in Los Angeles at a time when LA was dealing with simmering tensions that were soon to explode in real life. What does The Big Blowdown say about the mid 90s? I’ll have to think about that.

This entry was posted in Uncategorized and tagged bigblowdown, hardboiled, pelecanos. Bookmark the permalink.

4 Responses to The Big Blow