I want you to see the bullet coming. 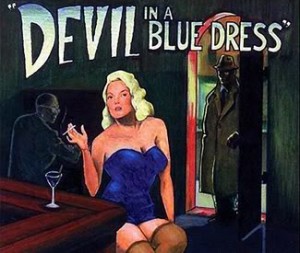 Blond is not how I would have pictured her.

I listened to Devil in a Blue Dress on CD rather than read it. I think you lose something doing it that way – it’s a different kind of experience. As I wrote before, the narrator becomes part of the book, for better or worse. Devil in a Blue Dress was narrated by G. C. Simms, who did an amazing job, especially with the vocal characterizations. As far as I can tell, this is the only audiobook he has done, which surprised me.

I listened to it as I was driving to and from work, so I wasn’t giving it my complete attention (my bad). There were a few things that jumped out at me. One is the scene in Santa Monica, where Easy is about to run into trouble for talking to a white girl when Dewitt Albright comes onto the scene:

Albright comes across as smooth and calm. That’s something G.C. Simms brings to it. The combination of his tone of voice, what he says and what’s going on make the scene particularly creepy. The way Moseley paces the action does that as well, pausing for description so as to drag it out, heightening the tension. The film version loses a lot of that. Tom Sizemore as Albright doesn’t exude that smoothness – he comes across as more explosive – and the scene takes place in real time, which doesn’t help to stretch the tension. It’s still twisted and brutal, but less so.

Later on Albright expounds on the nature of capitalism:

which brings to  mind the earlier scene where he’s introduced to Easy:

“These big companies don’t give a damn.” That’s capitalism too. There’s some other things in the scene. It takes place over a butcher shop. That butcher idea has multiple implications, and some of the non-vocational ones come into play later on. The reference to the stench of rotted meat could be seen as a metaphor for corruption, something fairly omnipresent in hardboiled noir.

And there were a couple little references to Ivory soap, like this one:

I’m not sure what we’re supposed to make of them. I made me laugh because my wife would sometimes compliments my smell after I shower. I always used Ivory because it was the cheapest thing on the grocery shelf. Maybe it was the same with Daphne. The distinctive scent wouldn’t have meant anything to Carter because he didn’t have to worry about money like the rest of us. I suppose that’s capitalism too.

This entry was posted in Uncategorized and tagged devilinabluedress, hardboiled, mosley. Bookmark the permalink.