There’s a little post-it stuck in my copy of The Black Dahila on the page where Bleichert first goes to the Sprague mansion and gets introduced to Balto. It says, “people who are not like us.”

What kind of a person decides to shoot the family pet and have it stuffed in order to commemorate an occasion? And what does it say about the family? A different set of values, a different set of standards for behavior – that they’re in a position to do what they want and get away with it. Class differences came up before, in Mildred Pierce and Strangers on a Train, but this seems to be on a whole different level. Then again, everything about this book is on a whole different level.

When dog-shooter Emmett starts to tell the story of Balto, some of the family react like they don’t want to hear it. I found it interesting that he referred to his birthplace, Aberdeen, as a “dead dog town.” Maybe he didn’t like the town, but I guess he liked the other part. Later in the dinner-table conversation, as mother Ramona starts telling her bit, Ellroy uses an unusual choice of words:

The woman’s out-of-kilter face congealed around the words…

“Congeal” means to solidify, take shape or coalesce. It was implied earlier that she was intoxicated on something other than alcohol, so the phrase is telling us that she becoming focused and attentive, but it also makes us think of blood (not that there isn’t blood on every other page in the book). In hindsight, this whole little scene ends up being the source of many clues. 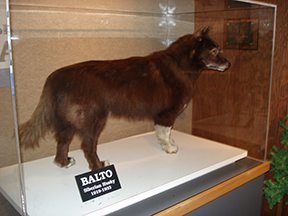 If I paid more attention to Disney films, I might have known that there really was a dog named Balto. Instead I googled the name, just to see what would come up. Not only was Balto a real animal, but he’s also really stuffed, and on display at the Cleveland Museum of Natural History.

This entry was posted in Uncategorized and tagged balto, blackdahlia, ellroy, hardboiled. Bookmark the permalink.