Those were different times

Looking at the popular reception of some of these books back when they were published is kind of fun in a way because it sometimes shows them in a different light. We look at Mildred Pierce and see a hardworking woman doing what she needs to do to provide for her family, whereas reviewers at the time of the novel found the family dysfunction shocking and horrifying. We’re used to seeing imperfect families and troubled relationships these days, but maybe people didn’t talk about them in the 40s. 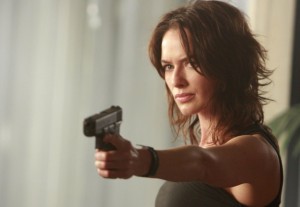 So I look at V.I. Warshawski and think it’s cool the way she’s tough and goes toe to toe with mobster henchmen, but it doesn’t strike me as revolutionary. I mean, Sarah Connor has been kicking ass for years now. But things have changed over the past thirty years. Back in the 80s, Sarah Connor was a little waitress damsel in distress to be saved by some white knight riding out of the future. By the 90s she was a tough fighter, but was regarded as a dangerous freak and kept locked up in an asylum. And just a few years ago she was covertly leading a fight to save the world. I come to Indemnity Only from that perspective.

But at the time the book was published, in the early 80s, there were no tough female private eyes. Women who solved mysteries were portrayed as amateur busybodies or meddling kids. And the advent of the hardboiled female detective was not entirely welcomed. Marilyn Stasio, writing in the New York Times in 1985, a few years after Indemnity Only, said:

The publishing industry at this point is skeptical about the broader appeal of these women who are detectives and private investigators. Those in the industry hold that most readers of hard-boiled fiction are men, and the trade does not see them racing to buy books written by and featuring women. They are not so sure that women want to read them either.

I guess they had enough appeal that Paretsky wasn’t a one-hit wonder, and wasn’t alone in what she was doing. But it wasn’t just the suits who were skeptical. Stasio quoted hardboiled author Lawrence Block:

”The hard-boiled private eye is a special figure in American mythology,” he says. ”It’s a staple of the myth that he should be a cynical loner, a man at odds with society and its values. That’s not something women normally relate to. Women aren’t cynical loners – that’s not how they like to work. It seems to me that if they want to go into the profession seriously, women writers will have to change the myth itself, instead of trying to fit themselves into it.”

It seems strange to me that someone could get away with making categorical statements like that and still be taken seriously. But the 80s were a different time, and it’s easy to forget how much people’s attitudes can change in a few decades.

This entry was posted in Uncategorized and tagged hardboiled, paretsky. Bookmark the permalink.

2 Responses to Those were different times