I tuned into radio ds106 last night for the hardboiled class, but the ds106ers were using it instead. Too bad – I wanted to hear what people had to say about Strangers on a Train. 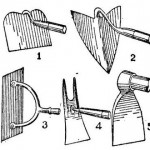 One thing that caught my attention was when Bruno referred to Miriam as a roundheels, and his mother tells him to watch his language. Apparently roundheels is a mid 20th century term for ho, although it appears that the term can be used in other contexts. The idea is that rounded heels make it easy for a person to tip backwards into a missionary position. Who comes up with these things?

Another thought I had was that Guy, with his sense of guilt, reminds me of the the guy from The Tell-Tale Heart. All those moment where he thinks everybody knows… 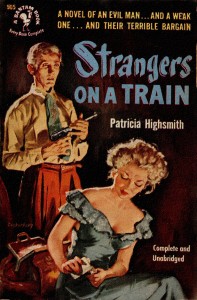 Highsmith gives some colorful descriptions. Bruno contemplating doing the deed: “Like an enormous walnut in feeble, jittery squirrel hands, an idea, bigger and closer than any idea he had ever known, had been revolving in his mind for several days.” Bruno as a giant quaking rodent. Bruno starts out as a giant pimple and goes downhill from there – pink-eyed, puffy, bloated. As he discusses travelling with his mother, “A tingling, naked sensation spread over his buttocks.” That’s just ewwwww.

This book cover is cool though. Just look at their expressions.

This entry was posted in Uncategorized and tagged hardboiled, highsmith, strangers on a train. Bookmark the permalink.