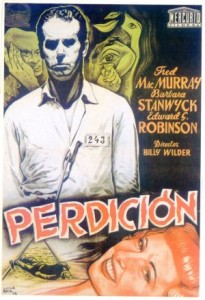 A Spanish-language poster for Double Indemnity from the linked blog, hinting at the deleted gas chamber sequence. I like the surrealist touches in the background behind Neff.

Chapter two of More Than Night is “Modernism and Blood Melodrama: Three Case Studies.” It analyzes The Glass Key, The Maltese Falcon and Double Indemnity. The end of the chapter has two publicity stills from the alternate ending to Double Indemnity. Naremore says the gas chamber scene would have been too dark – “would have thrown a shadow over everything that preceded it” (p. 93). Wilder says he decided it was too anticlimactic (YouTube – Love the 70s audience). Even Cain preferred Wilder’s filmed ending to his own.

The script for Double Indemnity actually has two alternate endings. The first has Neff saying “At the end of that…trolley line… just as I get off…you be there… to say goodbye…will you, Keyes?” after the “I love you too” line that closes the film. I can see how that would be superfluous. The second ending follows that with the largely dialogue-free gas chamber sequence. I haven’t read Cain’s story all the way through, but I did look at the last two chapters for his ending. He has Walter and Phyllis committing suicide together rather than face arrest. I think I agree that Wilder’s ending is superior, but I’ll have to read the whole story before I’m sure.

This entry was posted in Uncategorized and tagged cain, doubleindemnity, hardboiled, noir. Bookmark the permalink.