When @cogdog points out something online, I try to pay attention. So when he highlighted the Internet Archive’s filmstrip collection, I took a look.

The Hippies caught my eye. It’s a somewhat strident and paranoid view of 60s counterculture, for people who thought Dragnet was too soft on them. The idea that business and advertising created hippies was novel to me. 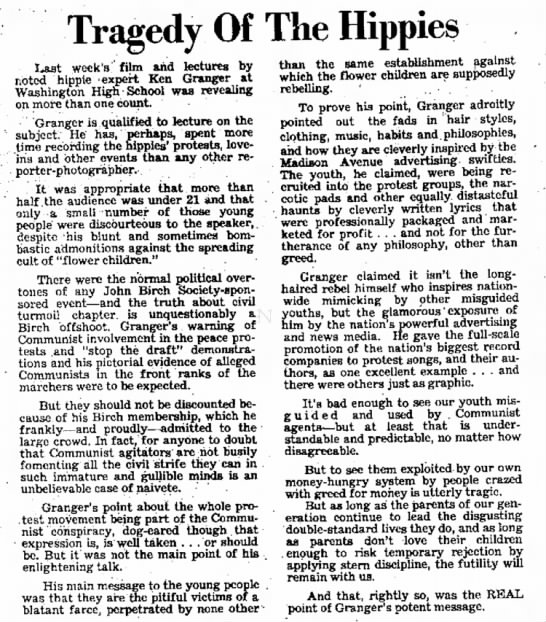 I was thinking about how I might remix this. I could weave in songs mentioned in the script, like San Francisco (Be Sure to Wear Flowers in Your Hair) and Eight Miles High, but maybe that’s too obvious. Songs suggested by the script, like Madison Avenue Man or Debaser might be more interesting and eclectic, but would probably only make sense to me. Taking audio clips from the filmstrip and intercutting them into a playlist might be a better approach.

It also makes me think of The Mothers’ classic, We’re Only In It For The Money. I doubt that Zappa’s take on the hippies was influenced by Granger’s, but I see an alignment in contempt. Since the album is a sonic collage already, it has plenty of remix potential. So maybe there will be a ds106radio project in the works.

This entry was posted in Uncategorized and tagged ds106radio, hippies, remix. Bookmark the permalink.