This morning we had another episode of Jim’s Monogamous Book Club, and a great time was had by all the participants and the one listener. We had a rambling discussion of Jack London, The Iron Heel, and plotted to make it a regular thing. 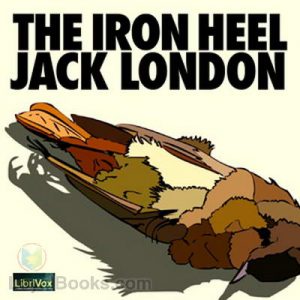 I think it was in reading about The Twenty Days of Turin that the book came to my attention. Since ds106 is currently looking at post-apocalyptic dystopias, I thought it might be appropriate to take a look at The Iron Heel and how it fits in. It’s been described as possibly the earliest example of dystopian fiction, a pre-apocalyptic proto-dystopia, if you will.

It’s utopian as well, in a way. While the main narrative takes place in the early 20th century, 1912-1932, beginning a few years after London was writing, it also has editorial interjections from a utopian future 700 years later. London gives us his nightmare vision of a near future, and also reflects on it as a distant past. What he doesn’t give us is an kind of picture of what that utopia looks like, or how society got there. On one hand, it makes for a fascinating structure, and on the other, it feels like a cop-out. The narrative of the novel actually ends mid-sentence, as if London didn’t know how to wrap it up or where to go from there. He just stopped, and had his editor from the future provide a closing thought.

Which brings up the question: Is it a good book? It feels like an odd question to ask, since we both invested time in reading it, thinking about it, and discussing it. It makes for interesting discussion, as a product of its time, as a vision (sometimes eerily accurate) of the near future, and for how it is relevant to today’s world. It is also tedious, sometimes pedantic, often unreflective, and lacking in nuance or subtlety. I wondered if London might be making a comment on the vacuousness of the newly-minted True Believer, but apparently he was one himself. As Jim pointed out, the most compelling parts of the story, the Red Virgin and the terrorist organizations, are only mentioned in passing, when they could be worth a novel in themselves.

Jim and I enjoy these discussions, and we both feel a need to read more, so we talked about making it a regular thing. He suggested doing a book a week, which we sort of did during True Crime, but I thought doing that for a whole year would be Martin Weller type heroics. So we decided on every other week – a book a fortnight. It’s a challenge we can meet. Keeping it up for a whole year is a bit of a commitment in light of everything else we have to do, but it should be a worthy project. In keeping with the themes of The Twenty Days and The Iron Heel, our future plans include Sinclair Lewis’ It Can’t Happen Here, Leo Perutz’ St. Peter’s Snow, and The Parable of the Talents by Octavia Butler.

And this may tie into an idea I’ve been toying with for a while. I’ve seen a few discussions of canonical graphic novels in the past few years and they all put the same three at the top of the list: Watchmen, The Dark Knight Returns, and Maus, all of which come from 1986. Since they’ve all been dissected to death, I’m interested in looking at antecedents. I’m thinking Ronin, V for Vendetta or Saga of the Swamp Thing, and American Flagg!, and as they are all products of the 80s, they should be right up Jim’s alley. And they’re light weight enough so that we could actually get through them in the time frame we’ve given ourselves.

This entry was posted in Uncategorized and tagged book club, the iron heel. Bookmark the permalink.