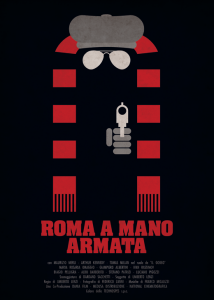 This morning I found this movie poster in my Tumblr feed. I wouldn’t exactly call it minimalism, but it is a close relative. I like the simplicity, the directness, the symmetry and the subtle use of texture in the cap. Intrigued, I looked into the movie. Roma a mano armata (Italian for Rome Armed to the Teeth) is an Italian poliziottesco from the mid 70s starring Maurizio Merli (Italian for Chuck Norris). I found a trailer on Youtube. While it’s not the kind of trailer where you really need to know the language, I thought I’d try to get translated subtitles anyway. I turned on the closed captioning and activated the auto-translate function. This may or may not be better than nothing. It listens to the sounds and tries to make it into words, but it can’t differentiate among speech, sounds effects, ambient noise and background music. And then it tries to translate those words from Italian into English, which adds to the potential for error. So you get these unintentionally humorous moments where gunshot sounds translate as “Welcome” and “Good morning.”

Since I thought that was kind of funny, I tried to capture it. I downloaded the video, but that didn’t bring the captions, which didn’t surprise me. I used Quicktime to capture a screen recording of the captioned video. This didn’t record the sound, but I could use Audacity to import the previously downloaded video and convert it to MP3, and then put that together with the screen recording in iMovie. That may sound like a lot, but actually the most time consuming part was waiting for iMovie to open.

If I had had the presence of mind to check IMBD in the first place, I would have found that it had a different title in the US. That trailer is on Youtube as well.  But then I would have missed all the fun.