Callin’ from the fun house 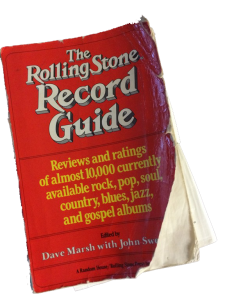 I’m sure a lot of books have had an impact on me. But the first one I though of when I saw the Daily Digital Alchemy today was The Rolling Stone Record Guide. I got this when I was in my mid-teens, very interested in music and very not interested in most of what was on the radio. This book introduced me to the history and evolution of rock music, the classics and obscurities. There was much in their ratings and reviews that I disagreed with, but there was so much that was new to me that it proved invaluable over time. I remember once I was in the Record Archive and found a used copy of the then out-of-print Funhouse album. I didn’t know anything about it, but felt the need to pick it up, and it ended up being the best 99 cents I ever spent. Sometime later I looked up Iggy Pop in the Guide. The was a line that said Funhouse was for people who thought The Sex Pistols were mellow. I realized then that that was what subconsciously moved me to get the record.

Does it make sense that a librarian’s life was transformed by a reference book? Probably.

This entry was posted in Uncategorized and tagged dda51, funhouse, netnarr. Bookmark the permalink.