We have a new edition of ds106 starting up: Mission 106. We’ll be taking our inspiration from the spy fiction genre in all its mutations, and making of it what we will. Make art, dammit! (TM) Everyone is welcome to join in. This will be a fun project because there are so many different takes on the genre, from serious to fantastic to parody and spoofs, and a long cultural history, from Conrad to SHIELD. So I made a little mash-up:

Who is secret agent 106? And what is this agent up to? Maybe that’s something we should find out.

The idea for this came from our ds106 man in Arabia, @scottlo

While I liked the idea because of my namesake, I also had some concerns about the sexism that runs through it. But it seems like that runs through our entire culture, so it can be something to critique or counteract, or turn on its head. Maybe that can be part of our mission, should we choose to accept it.

My little mash-up did get some positive response:

which gave me an idea: Maybe we should have a license. I looked for a license to kill to adapt, and built upon the work of Funeral-Of-Hearts 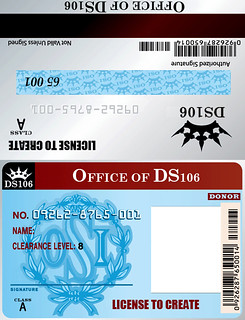 Now you can have one of your own.

Our friend Tina wants in on the action too:

so we should all behave. But have fun too.