Frame within the frame

The A.V. Club has been doing A History of Violence in cinema, where they look at “the most important action movie of every year” from 1968 on. They’ve got Dolemite on the list, and while I’m not sure I’d call it an action movie, the mere fact that they brought it up makes them OK in my book.

What really interests me in the series are the also-rans, which include some that I haven’t seen. Through looking into these, I somehow came across Targets, an early Peter Bogdanovich film from 1968. From a modern perspective, it doesn’t qualify as an action film, nor if it particularly violent, nor is it very good. But there were some interesting things about it. 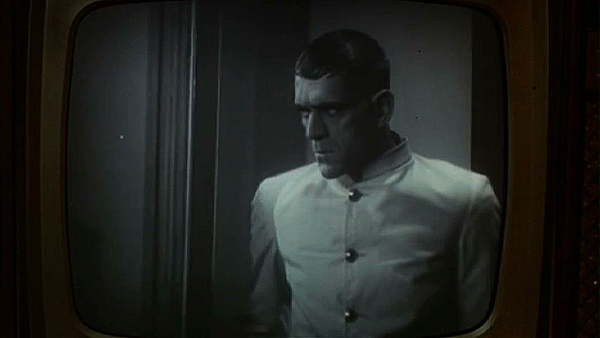 Boris Karloff in The Criminal Code as seen in Targets

In the movie, aging horror film star Boris Karloff plays an aging horror film star, and writer/director Bodganovich plays a young writer/director, creating a weird film within a film situation, which is mirrored on screen as the two watch The Criminal Code, Karloff’s 1931 film, on TV, and again at the climax where The Terror, a Karloff/Corman collaboration from 1963 plays onscreen at a drive-in.

Boris Karloff in The Terror as seen in Targets

There’s a second storyline throughout the movie, of a clean-cut all-American boy who for no particular reason goes on a shooting spree. Boris slaps some sense into him at the drive-in. The point is that Karloff’s brand of horror pales before the real-world monsters. 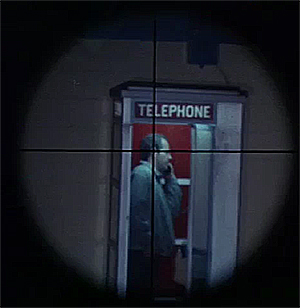 One thing I like about old movies is that you sometimes catch a glimpse of actors before they got famous. Close observers of Targets may notice Mike Farrell, AKA Capt. BJ Hunicutt of MASH fame, as the man in the phone booth. I suppose sharing the cross-hairs with Boris Karloff isn’t the wosrt way to start a career.

This entry was posted in Uncategorized and tagged karloff, targets. Bookmark the permalink.

1 Response to Frame within the frame