Her mouth was a crimson velvet petal,
Her hair was beaten from gun-metal.

That couplet from The Wild Party always stuck with me. The contrast makes it striking, but the gun-metal metaphor is something else. Primarily it’s meant to describe color, but it brings so many other connotations – something dangerous, something hard and cold, a weapon. It’s also “beaten,” with more connotations of violence and fire. That choice of words raises all these thoughts, even if only in the back of our minds. That, more than the rhyming, is the poetry of the piece.

Cody found a video of the illustrator, Art Spiegelman, talking about the book and two musicals that were made from it. There was also a movie back in 1975. Spiegelman talks about the challenges of translating the work into other forms, saying that the story could fill a thimble. Even illustrating the work had its problems. A few pictures, he said, would take away from the reader’s imagination. By doing a lot of pictures, it becomes more decorated than illustrated. When there are so many pictures, each individual one has less significance. He diminished his own work to put the spotlight back on March’s words. 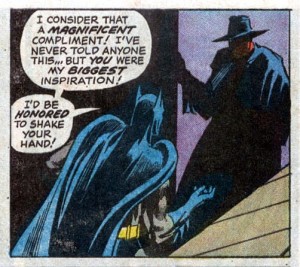 Translating works across media is something of a theme with hardboiled/noir, and a theme of the week. Cain’s novella became two movies and a radio show. The Killers was brought to the screen three times. The Shadow was born on the radio, then moved to pulp magazines, then to movie serials, newspaper comic strips, and later into comic books. He was also part of the inspiration for Batman. And we looked at the Chinatown screenplay rather than the film, kind of a reverse translation. I guess that says something about the appeal. The common themes that people have been picking up on in noir – murder, lust – are the stuff of ballads going back hundreds of years. So noir is timeless.

1 Response to Party on, Garth