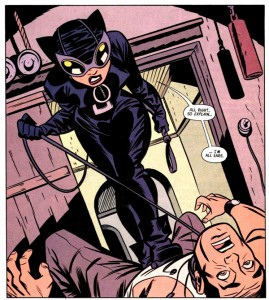 I don’t think I ever read The Postman Always Rings Twice before. I saw the 80s movie a long time ago, and the 40s film a few weeks ago, but didn’t notice the cat theme until I read it last night. I’m no supercutter like John Johnston, but I can handle Control-F. So here are just about all the “cat” lines from the story:

Cora’s not really a hell cat, but Frank talks her into being one. She gets convinced of the idea and sees it as her way out of her situation. But cats are known for sharp teeth and claws. It’s Cora who says “Bite me! Bite me!” and “Rip me! Rip me!” She’s telling us that Frank is the real hell cat.

I almost hit the horn, but then I saw it was a cat. It was just a gray cat, but it shook me up. A cat was the last thing I wanted to see then.
I didn’t want to blow the horn, because it wasn’t anything but a cat, but I didn’t want it around that stepladder.
“Goddam cat, going up that stepladder.”
“Ha.”
“I love a cat. They’re always up to something.”

Why was a cat the last thing he wanted to see? The policeman who showed up would have been a better candidate. The policeman sees that somebody is up to something, but he doesn’t really get it.

The cat got fried on the fuse box. How’s that for foreshadowing? They know they’re looking at an electric chair jolt. It doesn’t phase them though.

Cat lunatics – it refers to “outlaw” cats, “bred in captivity.” Cats that will kill you. Other cats might kill, but the cat lunatics will. Frank knew he was born to wander. Nick and Cora tried to keep him in one place. It didn’t work out well for any of them.

“How can you tell it’s a jungle cat?”
Let’s let Goebel keep those bughouse cats for their board, sell your car for whatever we can get, and hunt cats.”
When she came back she had a kitten with her, but a kitten that was bigger than a cat.
“And the cat came back! It stepped on the fuse box and got killed, but here it is back! Ha, ha, ha, ha, ha, ha! Ain’t that funny, how unlucky cats are for you?”

I’ll leave that one to the National Film Board of Canada:

The Cat Came Back by Cordell Barker, National Film Board of Canada

There’s a lawyer, Katz, who represents the two in court, but like all cats is mainly looking out for himself. And the cat comes back again in the final court scene:

He even had the puma in court. It had grown, but it hadn’t been taken care of right, so it was mangy and sick looking, and yowled, and tried to bite him. It was an awful looking thing, and it didn’t do me any good, believe me.

Shades of Dorian Gray there. I just have to sign off with Toonces:

This entry was posted in Uncategorized and tagged cats, ds106, noir106. Bookmark the permalink.