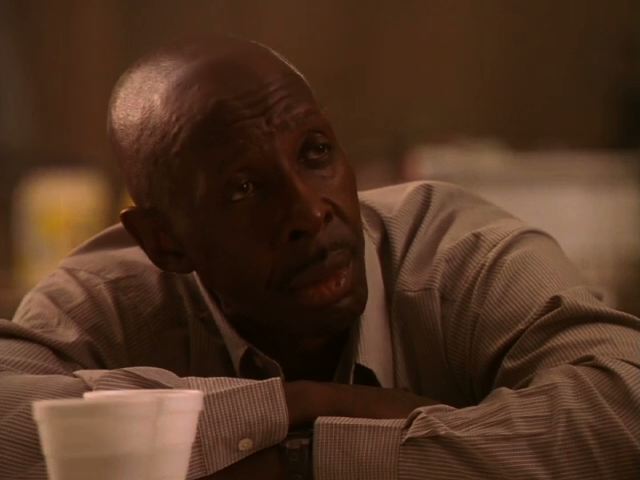 A minor character who makes his debut in this week’s episodes is the Deacon. I’m not sure if he has a name beyond that. He’s played by Melvin Williams, a former Baltimore drug kingpin who served as a partial template for Avon Barksdale. Simon wrote a series of articles about him for the Baltimore Sun. I couldn’t find them online, but did find a blog post discussing them. Many of the characters in The Wire are built from real people that Simon and his co-authors have encountered, or have been for that matter. The series takes that a step further by weaving real people into the story. Detective Ed Norris is played by Ed Norris, former Baltimore police chief. The character Omar was inspired by Donnie Andrews, who has a bit part in some episodes. Jay Landsman is based on Jay Landsman, who plays Colvin’s second-in-command. Felicia “Snoop” Pearson is portrayed by Felicia “Snoop” Pearson, who was a product of the environment seen in the series. Simon talks about the city of Baltimore as a character in the series, which we see in the photography and authentic settings, but I think the blurring of real and fictional characters also contributes to that.

UC Berkeley professor Linda Williams wrote (PDF) about these connections in studying the ethnography of The Wire. I’ll have to read that more closely.

This entry was posted in Uncategorized and tagged ds106, wire 106. Bookmark the permalink.