Set your poems to music

Melinda’s Wire poem is just awesome, both in the writing and the reading. The rhythm in the reading is so good that I thought I’d try to add a music track to it. Here’s what I came up with:

I recorded Melinda’s track using Audacity and Soundflower so I could have something to work with. I have the season 1 theme by The Blind Boys of Alabama(YT) in my iTunes (Spirit of the Century is a great album all the way through), so I imported that into Audacity. I edited out the verse sections, which was kind of tricky. When doing something like that, you want the beat to flow evenly through the edits. At first, I had a little stutter where the sections cam together, But I could see the spike in the waveform where the beat was, so I was able to trim it so the beats lined up. It was sheer luck that the instrumental sections that I kept more or less matched the length of the poem. There is a little overlap between the end of the poem and the part where the song’s vocals come back in, but I think that’s okay. It was also a happy coincidence that the rhythm of Melinda’s reading lined up with the beat of the music so well. I tweaked that in two or three places, either shortening or lengthening pauses to make the waveform spikes between the two tracks align. 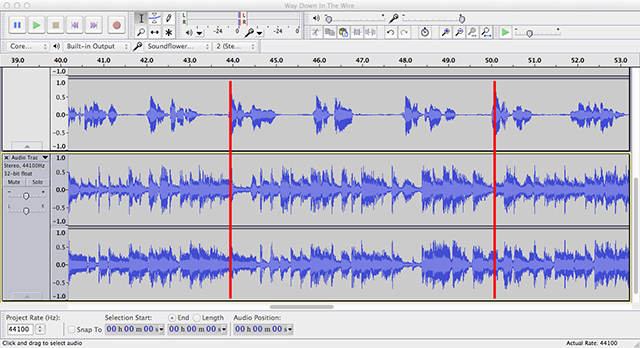 I had to adjust the volume balance between the tracks too. I used the sliders on the left to boost the reading a little bit. It was okay over the intro music because there was not much instrumentation, but when the solos came in they started to compete. So I selected that portion, from the start of the lead break until the end of the reading, and used the Filter->Amplify function to reduce the volume of the music. I had to do it twice because the first attempt still left it too loud. You can see below where the waveform is squeezed. 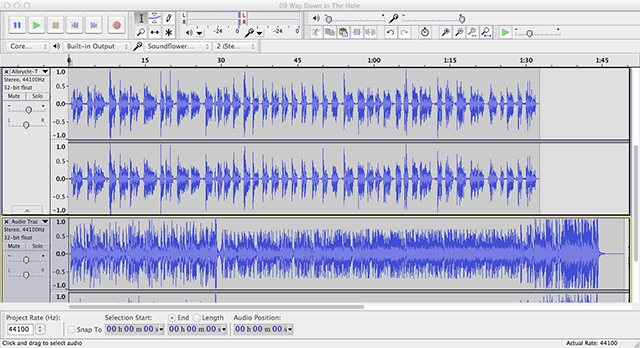 It was important to adjust the music to her voice rather than the other way around, because i wanted to keep the quality of the reading.

2 Responses to Set your poems to music