There was some interesting photography in episode 11, and I’m not sure what to make of some of it.

The opening scene picks up from the end of the last episode, at the scene of the shooting. The segment is shot with a handheld camera, wandering through the crime scene, looking around at the chaos. The way it’s done creates a sense of confusion, of being lost, in the viewing audience. I cut out too many frames when I made it into a gif, which made it too choppy, but still you get the sense of being all over the place without any focus. 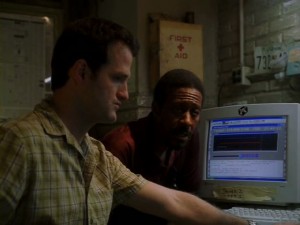 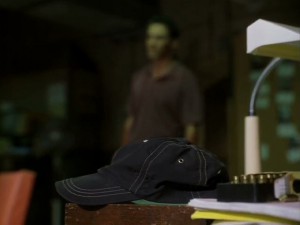 As the story shifts back to the squadroom, what happened on the street is still in the air. As we look at Prez and Freamon, we also see the first aid kit in the background, as a reminder. A more overt reminder is the shot of Kima’s signature hat on the desk, right next to a box of bullets. 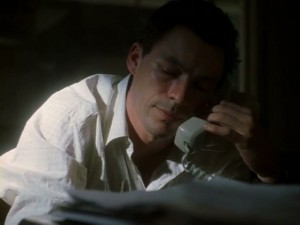 There are also a couple things that I don’t know what to make of. We see McNulty with this sort of glowing aura from his shirt. Is that to make us misty-eyed? Is it supposed to imply that he’s innocent of the guilt he’s feeling? Am I just reading too much into it? 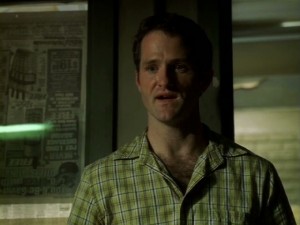 The shot of Prez stood out out me for the green-ness of it. Green in his shirt, green on the walls, the green from the light giving everything a green cast so the image is almost monochrome. Maybe it doesn’t signify anything other than the attention the designers and photographers pay to color and lighting. 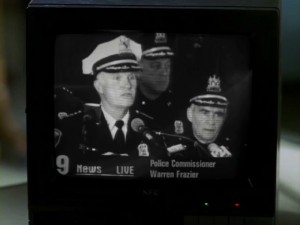 The shot of the commissioner’s press conference on the little black and white TV caught my attention. Coincidentally, it popped up on the WireScenes tumblr this morning too. We’ve been seeing surveillance shots throughout the season, and the way this is presented makes it look like one. The bureaucratic hierarchy deserves as much scrutiny as anything else. But maybe we’d end up like D’Angelo, brooding as the world goes by.