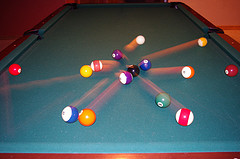 Once upon a time, way back in my undergrad days, Johnny D asked if I wanted to play some pool. “Dude, I can count on the fingers of one hand the number of times I’ve played pool.” “So what? You should be good at it. It’s all vectors.” So apparently because I got an A in high school physics, I should be good at pool. The term vectors always brings that story to my mind.

Vectors, as I recall, have velocity and direction, so I suppose thought vectors would imply thinking intently and intensely towards some purpose. But that pool analogy colors my thoughts with a vision of colliding ideas going off in unexpected directions. Smells like creative spirit.

At the same time as this thought vector thing is ramping up, The Internet Course is winding up. We were just discussing Vannevar Bush and JCR Licklider a few weeks ago in building our internet timeline. And we’re talking about man-computer symbiosis (as in cyborgs) this week as we envision the future of the internet.

Our friend Wikipedia says the term cyborg comes from a 1960 paper (PDF) by Clynes and Kline, the same years as Licklider’s paper.

I think I first encountered the concept in The Avengers TV series, “Return of the Cybernauts” in my childhood days. I don’t remember anything of it now really, so it’s too bad it’s not streaming on Netflix. The earlier episode is out there though. There were also bionic men and women on TV in the 70s. I don’t remember them being called cyborgs, although the series comes from a novel of that name. The bionics seem more add-on than symbiotic to me, probably because there was no AI involved. 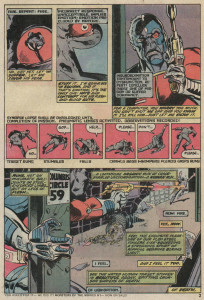 Marvel Comics wanted to adapt The Six Million Dollar Man, but lost the bidding war to a competitor. Instead they gave the green light to a true cyborg character, Deathlok. The story was born out of the Vietnam/Watergate era, but set in the 80s/90s timeframe, and prefigures The Terminator, Escape from New York, and Robocop especially. I remember being fascinated by the internal conversations between the more-or-less human half of the character and his onboard computer. You can see some of that in this scene. There’s also a third voice in there – I’m not sure who that is. Thanks to Diversions of a Groovy Kind for a scan of the full story.

The conceptual parallel between Deathlok and Robocop is so close that it seems like it’s a direct influence. The writers say otherwise, that they took their clues from Blade Runner. Allegedly, they also took inspiration from the comic book characters Judge Dredd and Rom, so there may be an indirect connection. Blade Runner was released while William Gibson was in the process of writing Neuromancer, much to the author’s embarrassment. He thought he’d be accused of stealing ideas from the film, when he was actually inspired by Carpenter’s Escape from New York.

What is it with the 80s and techno-dystopia? Deathlok was a little ahead of his time, although Orwell saw it coming decades earlier. According to Licklider, the USAF saw something coming too:

A multidisciplinary study group, examining future research and development problems of the Air Force, estimated that it would be 1980 before developments in artificial intelligence make it possible for machines alone to do much thinking or problem solving of military significance.

There’s a tension in that man-computer symbiosis. One view sees the machine as dehumanizing, the technology as a child of war, the worst of man’s efforts. But Bush saw it as enhancing and extending, making man, like Steve Austin, better than he was. And Licklider says the road to symbiosis will be ”the most creative and exciting [years] in the history of mankind.” The darker view makes for better fiction, but the hopeful view looks toward a better tomorrow.

This entry was posted in Uncategorized and tagged cyborgs, thoughtvectors. Bookmark the permalink.

1 Response to Vectoring through concept symbiotics