Chelsea brings up the power of the media, and also touches on state power by bringing up the prison system. Foucault talked about power and the state, that power is negotiated between governments and the governed, and knowledge and power. Steffans and the muckrakers show something of the media’s role in the power relationship. His story was not really breaking news; he just packaged information that was already out there to provoke public outrage. Some people do similar things today. I think what this does is try to clarify for the public what’s going on. And hopefully the public, informed by that knowledge, pulls the reins on people in power.

But Steffans also suggests that there is a power relationship at work that is something other than democratic: “we Americans are not led, but driven” (p. 8). Does the media have a role in that? To what extent is the news actually propaganda in disguise? 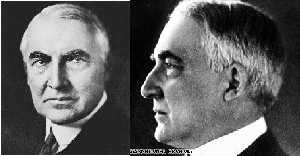 One could ask the same questions of history. Harding is perennially ranked as one of, if not the worst president ever, due to the scandals that plagued his administration. Gary Alan Fine’s article on Harding’s reputation, which I only skimmed, suggests that Harding’s ranking as possibly the worst president ever has more to do with politics of the 20s than historical facts. The opposing party saw a benefit in playing up the scandal, and Harding’s party saw no point in defending his reputation. That way the problems during his tenure would appear to be a failure of the individual, rather than flawed policy.

These stories also connect to a discussion we had earlier regarding the definition of crime. Political corruption can cross many moral and ethical boundaries without breaking any legal ones. Harding had his extramarital affairs, and both he and Ames put cronies into office. Problematic, not criminal, but it’s a slippery slope.

This entry was posted in Uncategorized and tagged corruption, true crime. Bookmark the permalink.