the survival rate for everyone drops to zero

Interesting how this assignment works. You put together three random elements to make a unified thing – an album cover. The Wikipedia link to me to a page titled Laws of infernal dynamics, which is not the best band name, but I’ve heard more cumbersome ones. While the entry has nothing really to do with heat, infernal suggests inferno. The random quote came from Fight Club: “On a long enough timeline, the survival rate for everyone drops to zero.” “Drops to zero” can be interpreted as related to heat, in an inverse way. Then the random picture was Sadness and Snow by Alexandre Bordereau, a blizzard scene of someone’s head exploding. Even though they’re all random elements, they had some connections, however tenuous.

The image would work as a cover design by itself, by I feel honor-bound to manipulate it. I copied the layer and inverted the colors, then played with the hue and saturation to get some warm color in it. I started playing with the layer blending mode until I got this freakish neon thing. I found a Jazz LET typeface, which I had never noticed before, so I used it for the title, and I forget what I used for the name. I thought the whole thing looked infernal enough. It’s time to sleep. 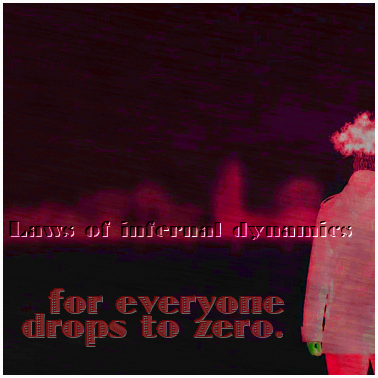